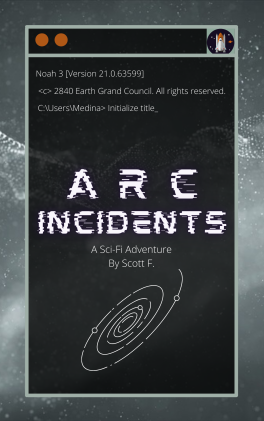 So here we are, the end of the encounter between Charlotte and End. This is about where I want this supposed volume of this story to end besides the last part next month. So yeah, this was the major sort of bit of knowledge that was supposed to lead into the next bit of the story which will be Volume 2. A much more action heavy portion to where this is all set up.

As always, you can find this chapter on Honeyfeed here if you want to check it out: Link

“Commander, we just got a feed into the Captain’s Quarters.” Communication’s Officer Lt. Mira immediately shouted to the commander sitting in the captain’s chair.

In a flash, the scene of Captain Medina’s room. From the door camera. There was the captain’s bed in the far off corner, the table where she area with the kitchen area behind it, and then the sitting room. A sitting room that had a casually dressed Medina sitting in one of her chairs. All usual things.

What was unusual was the shiny gold humanoid right in the middle of the sitting area. The figure wasn’t standing, but floating a few inches off the ground. Since it had no defining features, it was marked as a they/them because of this fact.

At this moment the thing that was concerning was the look on Captain Charlotte Medina’s Face. She had the most frightened expression that Susan has ever seen. It’s not that the captain was hurt or looked tortured, but that was not a face she wanted to see on her friend.

“We need to find a way to get into there.” Susan Ray looked desperately at her friend.

“Short of blasting the wall, I don’t know how we can do it.” Okita mentioned.

“Well, let’s see what options we can make before blasting hauls of this ship.” Susan said.

Speechless for a few minutes, Charlotte was able to say something. “Destroy, as if you have done it before?”

“More times than I can count, but it’s always a case by case basis. I never do it unless I consider a certain ship or species a threat.” End’s race radiated through Charlotte’s ears.

The fear in Charlotte’s face was still there. She wasn’t expecting to hear this so much matter affectibly.

“What makes us special then?” Charlotte was still having some difficulty processing the universe bending threat right in front of her.”

End floated up and down for a few seconds before answering. Almost like it had to think about it.

“Well, as I’ve said before, it’s because you humans don’t seem to be very aggressive. Or at the very least demanding from me at all for the moment.” End started floating closer to Charlotte. “Are you planning on being demanding anytime soon?”

Charlotte covered her face in fear. “No. No. Of course not.”

“Do you mind if I get something to eat? I am a little hungry and this has been a little stressful.” Charlotte sighed.

“Thank you.” Charlotte bowed and walked over to her kitchen to get something to eat.

“Did any of you hear what the gold figure said?” Commander Susan Ray said looking at the screen in question and Charlotte being safe for now while munching on a sandwich.

Jinto Barr looked thoughtful at the screen. “No, nothing. It must be in our captain’s head.”

“I can’t imagine that being comfortable. At least our captain isn’t being tortured, but she is very freaked out.” The navigator Lucas Bright replied.

“I am just glad that she got some time to eat.” Susan sighed. “How is the security team doing?”

Julie Okita was still on the wire and couldn’t reply. She was still focused and talking with her team trying to find any sort of weakness with everything they have available.

Susan decided to check on her later. She couldn’t imagine how difficult it was to find any way into the captain’s quarters without blowing the hallway. Not that there would actually be anything in motion here.

“How is our hacking going?” Susan looked at her science officer Jinto Barr.

“We haven’t found a way to communicate yet, ma’am.” He sighed. “It’s too tough and I don’t want to push our data core too hard.”

Susan tried to keep her cool though her head was full of worry. Holding her shaking hands before putting one of them on Jinto’s shoulder.

“Do the best that you can. That’s all we can ask for.” Susan smiled.

She immediately disappeared from the bridge a second afterwards leaving Jinto and the rest of the crew confused and frightened.

Charlotte immediately dropped what was left of her sandwich when Susan suddenly appeared in the room right next to her. She immediately got out of her seat at her table and hugged Susan.

Susan, of course hugged Charlotte back. “I don’t know how I got here, but I am glad you are ok.”

“It’s been very frightening and I needed some help.” Charlotte whispered in Susan’s ear.

“What is this figure we’ve been seeing on the bridge?” Susan whispered in return.

“I can hear you, you know.” End’s voice cut off what Charlotte was about to say. “And I thought that bringing Susan here would help Charlotte to relax a bit more.”

“You realize that you kidnapped Noah 3’s two top officer’s right?” Susan let go of Charlotte and stared at End ready to fight him.

End looked as smugly as possible that a figure with a face could when looking at Susan. “Your rules don’t apply to me.”

Susan was frightened a bit because the golden humanoid was right. She put her fists down. This figure was a god compared to them and could do whatever it wanted without major consequence.

“You are right, I”m sorry.” Susan bowed nervously toward End.

“Very good. Should we sit down and finish our discussion?” End’s voice radiated in their heads.”

Charlotte finished her sandwich and sat on her couch. “Let’s do it.”

Susan nervously sat next to Charlotte and held her hand.

“What is your question?” Charlotte sighed and squeezed Susan’s hand a bit more.

The gold figure called The End moved slowly closer to both of them, but not menacingly. It stopped a couple feet away from them. “One final question, what are you doing out here?”

Susan quickly stared at Charlotte before looking at The End. “You were in our computer systems and you don’t know this?”

“I didn’t dig into your ship’s database yet because I wanted to hear it from you guys. Please tell me.”

“We are just traveling out in space to find a new home.” Susan sighed. “Our planet is overpopulating.”

“Is that it? No war or anything?” The End was intrigued.

“Why would we even want to do that?” Charlotte was horrified again. “We humans just need a new planet to settle on. That’s all really.”

“Oh, that is a much more noble goal than most of the clients I approached. I will grant you guys a gift then.”

End raises his arm, shows a floating data disc, and then it disappears. “I just installed a universal translator into your ship’s computer. You will need it on your journey.”

“Wow, thank you. I never expected this.” Charlotte said with the floating data files in her previously unbusy hand..

“You guys seem worthy of it, so use it whenever you need it.” The End started to disappear. “I will be keeping an eye on your journey so don’t disappoint me. Please be as peaceful as you can.”

Suddenly, End was gone. Well, as far as Susan and Charlotte could guess it was. All the electronics  in Charlotte’s room started to come back to life.

“Ummm, Susan? Could you take this data file to the bridge?” Charlotte let go of Susan’s hand, turning to Susan, and then putting the floating pile of information into Susan’s hands.

“Yes. Yes of course” Susan was slightly flustered. “Do you plan on taking the day off? You do seem a little stressed.”

“I um…need to leave this room to take my mind off things.” Charlotte tried to look thoughtful. “Ummm, I’ll be there as soon as I change into my uniform.” She grabbed onto Susan’s hands affectionately.

Susan slowly let go of Charlotte’s hands, and started to stand up. “I’ll see you on the bridge then, captain. Oh, one second.”

Susan activated her communication device. “Bridge, this is Commander Ray. Situation is clear. Please deactivate your monitor to the Captain’s Room. Thanks.” Susan gave the thumbs up to Charlotte while turning it off again. “See you in a little bit.”

“Thank you.” Charlotte blushed a bit.

Susan nodded quickly and headed towards the door until she was stopped. It was Charlotte’s hand clinging to her.

“Actually, could you stay?” Charlotte whispered quietly. “I don’t want to be alone…”

Reading Charlotte’s expression, she pulled her into another hug. “Of course, as long as you want.”