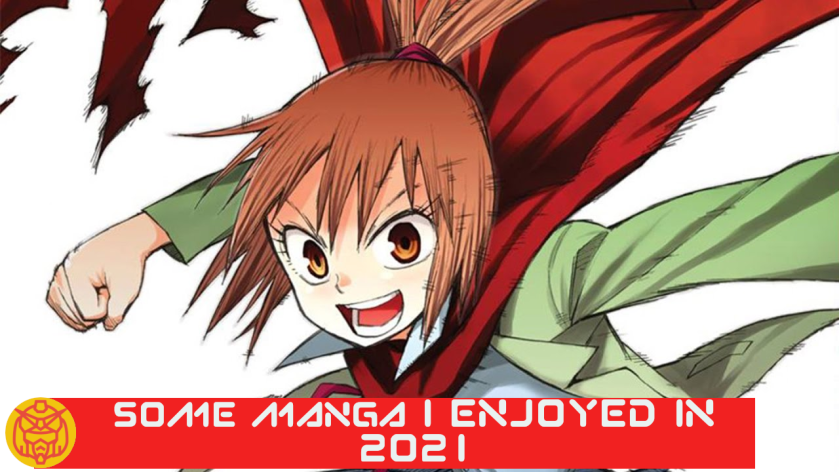 For the third piece of this ending segment of 2021, it’s time for a manga. Now, I am not one of the biggest manga readers, but I read some that I really enjoyed. That’s ok. I am still trying to do it even if I am not the best at it. I also really think most of the manga that I’ve read and checked out are pretty good as well. Plus, I don’t have to be a huge fan to enjoy manga. I just have to read some and that all that matters in the end. I haven’t even written about all the manga I want to write about that haven’t made it here and that could a little annoying as well.

So yeah, let’s dive into some manga.

Lucifer and the Biscuit Hammer

This was my small manga reading project for the year. I really loved this show. It’s such a chuunibyo like manga yet it is also one of the most interesting and heart felt things that I’ve read in fiction in general for a while. This is the story about a young college boy being chosen by a turtle to become one of the members to save the Earth until he meets a 16-year-old girl who wants to destroy the Earth after saving it. A cliched plot maybe, but the story of these two characters and other characters is just so well put together and realized. That these people have their special personalities and stories that brings them together. I love all of it.

This was one of the coolest manga that is on SJ+ right now. An adult man in his 30’s finally joining the anti-kaiju unit to fulfill his dreams after merging with the mysterious Kaiju No. 8. The manga really hasn’t gotten that far in its story because a lot of the chapters have just been action panels after action panels with all of its stories and lovely chaotic kaiju battles in between. Very slowly put together, but it’s nice to have something with some of the best action that I’ve seen in manga so far. Love it same with having an adult character.

I’ve only read a few volumes at this point, but I really love this story about this young girl learning about the kaiju that attacked her house as she also learns how to fly airplanes. Her relationship with that mystery and the old man whose plane she learned to fly have been very interesting. A very cinematic manga experience because I haven’t read a lot of manga like this one at all. The story has only started to begin, but I like how it is carried its characters and elements through already.

From Fujimoto, the man behind Chainsaw Man and Fire Punch, came this amazing one shot that is about art and how much it means to him. That exploration through these young girls as they find out their own art and ways of expression as they work on their own manga. Yeah, it really is such an amazing one shot.

Love triangles usually don’t work out or feel exhausting, but Blue Flag makes it work in spades. Especially since there are some stories about characters growing up and finally discovering who they are in their experiences at the end of high school. Very well written characters with some interesting and intriguing drama that is believable as well. It was hard waiting for so long for more manga chapters sometimes because of how well written all of that is.

I can’t help but say that I love this manga. It needed more room to characterize its cast a bit more before bad things happen to them, but the ride is incredible. Fujimoto seems to easily make some mind bending things. A tale of girl bosses and Denji learning who he is. A tale of lots of assassins and what it means to be self aware and a hero. Just a lot of things in under 100 chapters. Can’t wait for Part 2.

One day a struggling mangaka got a copy of a piece of manga from the future and eventually the story turns into searching for the pace a mangaka should write before destroying themselves. Very well crafted that a lot of people should read because its very short.