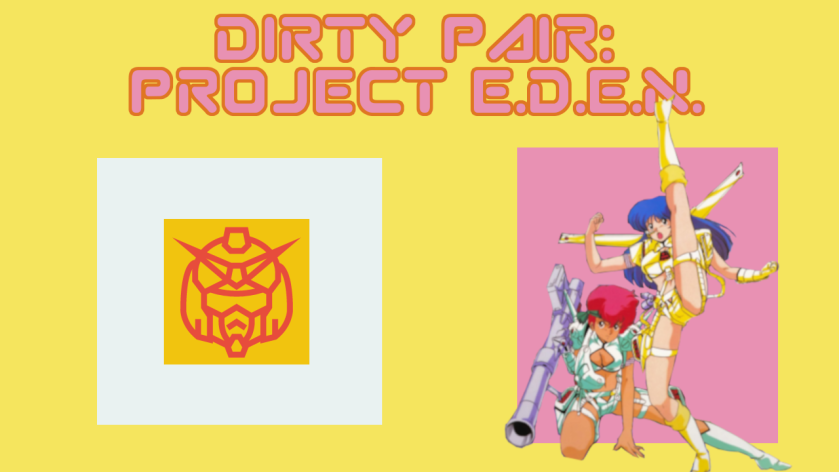 When hearing about the most famous parts of a franchise, there is always a certain piece of ah and reverence that comes from finally watching it. Especially when seeing what people were talking about when watching that years ago. That is how it has been with Dirty Pair for me. This is a small bit of a franchise that I wanted to dig into for a while and did it recently. I had no clear idea why some people were discussing this film as something great until recently. Well, I watched it now and investigated it a little more deeply as well. Some surprises came into that being and some disappointments as well. I guess I don’t have as big of a nostalgia figure for it as well. So yeah, let’s dig into this Dirty Pair film.

In this franchise (or at least in Project Eden), faster then light travel comes from mining a strange material called Vizorium. A material which Kei and Yuri stop some smugglers from getting in the introduction of the film itself. But regardless, the material is the key thing driving the plot itself considering that it is mined from the planet called Agema. A planet of two nations of people who have an economic battle of one mining the material themselves versus the other who uses third parties to refine it. Regardless, both of their mining operations are under attack by disrupting the flow into intergalactic markets. Somehow, Kei and Yuri are going to solve this problem for them hopefully.

The true plot of this movie starts, weirdly enough, when Kei and Yuri bathe in the middle of their investigation like they usual do, a peeper by the name of Carson D. Carson shows up to rile them up leading to the girls going through most of the rest of the film in bath towels. Yes, it really is a pivotable thing. Especially when all of them get attacked after capturing Carson and then the group getting attacked by strange creatures and the eventually attack on Dr. Wattsman’s lab. A lab where he is trying to get the Sadinga beings to their final evolutionary form. A man so crazed out of his mind and obsessed with his work. These are where the monsters that attacked the facilities came from.

So in general, the fanservice was playful and fun while not hurting the show in any sort of way. Especially since the towels are so well structured and that they became clothing here as well. The problem for is that Kei and Yuri were more out of character then usual. Or, in some ways, having the focus of the film with Kei who was crushing on Carson while Yuri was left to be a more comedy relief in it as well. Yuri does get her smart moments because she helped Carson and Kei through out the lab visit from being behind the scenes like usual, but I am surprised that she has a butt at the end of the episode. Same with Kei getting that crush in the first place. She is boy crazy, but she is somewhat professional with her missions. Guys come later.

Another point that I wonder about is Carson D. Carson himself. I can’t really say too many things wrong with him. I mean, he is a thief and is pretty much would be the woman that drives the plot forward if this was a standard action movie featuring the usual guys. So yeah, just a gender flip. Especially since the guy is a thief who wants to take steal something back from Dr. Wattsman’s lab. Somehow, WW2 leaked into this when he wanted wine from WW2 from who knows how long it existed and why its still around on a planet away from Earth a long time ago. Therefore I feel like the film is just a good action movie for the most part and why I don’t mind Kei and Yuri being as out of character as they could be. It is a good stand-alone film if a person doesn’t know anything about the franchise itself.

The added texture of this film being a complete 80’s music video for at least half its run. If not more. There is one scene where Kei and Yuri are on their flying car and Yuri just randomly starts dancing to the music on the radio and Kei literally must grab the wheel or otherwise they would both crash and completely die. Plus the large number of moments where music is the only audio on the visuals during so many great animation movements with so many bits of colors and laser shows and things. I loved the final action scene because it was just a light show of action and lasers all over the place. Almost perfection and everything that I never expected to have in film but here it is. Kind of incredible.

Which ties into how the film itself, it looked great in general. I have not seen the girls or even their character designs as detailed as they could be as well. Tons of outfits the girls are wearing throughout the film from space suits to their bikini outfits with lots of guns and such. So many great figure and action figure shots here as well. The forest scenes, monsters, and so many pieces of technology and other things are well categorized as well. Just a beautiful thing all around here as well. I saw in lousy YouTube quality. It needs to be upscaled into at least HD if not 4K. I do think the television series needs to be updated, but every part of this franchise needs that to happen too.

On a concluding note, I am on two minds for Dirty Pair: Project Eden as a whole because its complicated. But it, it’s amazing. Great visual experience as the girls go on their mission with tons of 80’s music and action scenes all over the place. If a person knew nothing about Dirty Pair, it would be so easy to dive into without it going before seeing the rest of the franchise. At the same time, Project Eden is such a stranger from the rest of the franchise. Completely unrecognizable from the rest of the franchise from how they act, think, feel, and such. So many its just a good bit of a starter piece of Dirty Pair when not diving into the franchise by the television series that was out first. At least that’s how I feel. The experience is good at the very least as well.