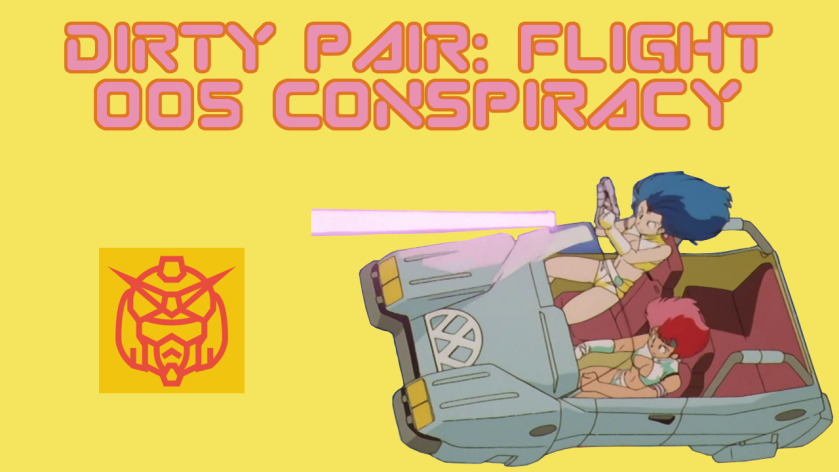 With this post, I am done with the whole serving of the original Dirty Pair series. So yes, I will have to do Dirty Pair Flash next year or even sooner then that depending on my feelings here. But yes, produced in 1990, the final journey of this version of our two Dirty Pair girls of the 3WA before they set out into the sunset. I do not believe that a bad version of the Dirty Pair exists but there are some versions that are either more entertaining or just not as hype as they could be. I feel like Flight 005 Conspiracy has a lot of the greatest hits of the best sort of things that Kei and Yuri have gone through in one hour. Something which makes it a bit compressed. Still rather good though.

Despite Chief Gooley’s anger, the 3WA’s computer assigns two missions to the Lovely Angels Kei and Yuri. Two missions that is unrelated but, as we all naturally can tell through how this all works, they are very much related. The first one is what happened to Flight 005 in the first place. The first case features the three hundred dead passengers when it exploded in the middle of a space flight. Very strange considering no insurance money was ever asked from it. Following that is the case that features a missing scientist and his family that need to be found. So obviously one is related to another.

The original Dirty Pair TV series had an episode centered on this extremely specific premise, but how it goes about it is differently. So a second version or just a 2.0 version of that two-episode arc handled in a remarkably interesting direction. With that being the case, it features Kei and Yuri at the best at what they can do. Kei with her tomboyish up front action scenes and Yuri with the behind-the-scenes support and intellectual side of the group. There is some help when a random person helps the case with the case a bit. I think the one hour run time had to be sped up a bit which some complain about but considering that that character was apart of the emotional experience of the special, its well thought out.

So, this OVA was decently wholesome in the end. Or, instead, like that through the whole thing. The Kei and Yuri interactions are wholesome like when Yuri and Kei’s interactions as well. That good feeling carried a lot of things for me because this is the way these girls are with each other. Not one ditching the other for a random boy that showed up but working together to create that unique experience there as well. The unexpected person in the story just helps the function faster but it does not disrupt any of their dynamic. All of which is the greatest way for the Dirty Pair duo to be handled. This OVA feels like a love letter to these girls.

For instance, what really happened to the passengers of that flight was cool. I really do not want to give any of that away because its worth watching for and cemented the whole experience for me as being great even if it is still lacking compared to the TV series. The case itself was handled well and there was a lot of forward thinking in this OVA that made it a lot more thoughtful than one would expect it to be. The best highlights of so many of these cases appearing with a good mystery and lots of cool space stuff as well. How often is a space liner really brought up in a larger science fiction universe for instance? I mean, there is a lot of from Earth to Space and in reverse stuff but no FTL traveling shuttles. So the mechanics of this space world is well thought out in here.

From a visual standpoint, Dirty Pair: Flight 005 Conspiracy looks great as usual. Very well thought out in its production processes following everything else earlier then it. For instance, the girls are looking great. Their character designs always make them very muscular and attractive which is important. Then there are all the other opposing factions, the cool city and space stuff, and all the tech that needs to be animated. Then the animation itself for the characters and all the fight scenes are great as well. It is just a well put together experience for the Dirty Pair series. A great note to end on all levels. So yes, this is a pretty wonderful experience that I would heavily recommend to people. A very underrated experience from how other members of the Dirty Pair community talk about it.