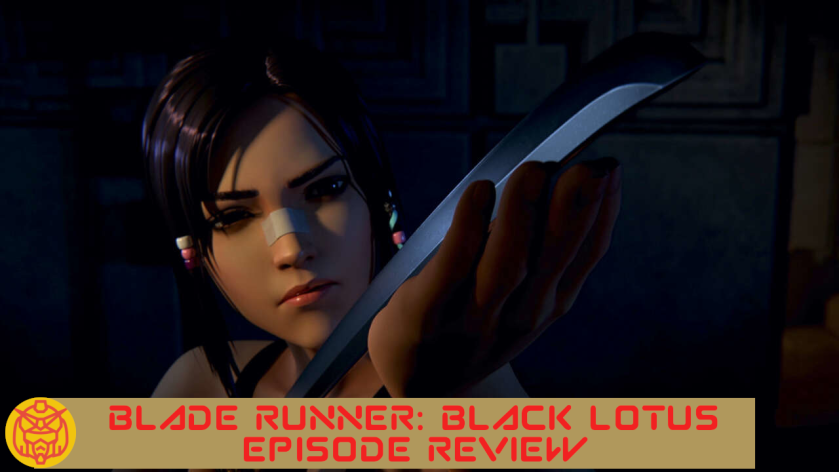 Last episode was one of my favorites. It felt, for all the small movements that were at play, like a large chess game between two people that were not equals. A battle of wills that could end one corporation easily or just a singular person that doesn’t matter as much in the grand narrative of the Blade Runner universe. So many pieces were at play and there was a cliff hanger between Elle and White. What more can a person ask for?

A Look At The Story

Quite a lot apparently. I feel like for all the things set up last episode, this was just a lot of stuff happening that didn’t get together as well as the script writer thinks it should. For a first thing, the fight between White and Elle only lasts for about two minutes because the security comes in allowing Elle to escape. Clearly Elle was overpowered because she didn’t have her katana, but the small bit of White just being a whatever and the subtext being “I’m a more advanced version of you” clearly is kind of boring. Not everything has to be unique, but there could have been more here.

And can I say that Alani Davis is just completed wasted in this story? She was murdered the same way Hughes was in Fullmetal Alchemist. On the phone calling someone while White came behind her and stabbed her. Maybe she isn’t dead yet because some comments on the episode mentioned how Officer Davis disappeared after being stabbed, but I don’t believe that. I also hope that something comes out of this phone call. Probably not though. Also, the conversation with Elle and Davis on the street was good but yeah, it was a pretty big nothing I think.

The large fight that took up most of the episode between Marlowe and Joseph was pretty good though. Very long, but it had the cat and mouse sort of chase that I expected from Blade Runner. It also made sense considering how Marlow has been a Blade Runner for years and Joseph has been sitting on his ass as a massive drunk for who knows how long. This was the small fight over AI and Replicant rights which clearly places Marlowe as the obvious bad guy. And Joseph losing a lot of blood from the shotgun blast to the shoulder was great, but somehow he won.

I don’t have as much to say about what came after. I do think that Joseph and Elle coming together was a natural conclusion and that his fight with Marlowe was kind of disconnected in some ways. There is still much to do in this episode like taking out White and Wallace Jr. Will they survive? Is Davis even alive? I wonderful how this will end.

I do think this episode is again some of the best that Black Lotus. Especially since a lot of the emotions came to play in those combat scenes with lots of good camera placement and action choreography. Lots of details to notice here though. I like how Marlowe and Joseph fought in the elevator like the two replicants did in the wring in the beginning to display how they aren’t much different. Also the way the shotgun blasts damaged was shown was pretty incredible. Very realistic just like the rest of this episode and show in general. How is this so grounded?

As I mentioned before, this episode felt very disjointed and some characters felt wasted from how they were treated or just outright killed without contributing a lot to the narrative in general. All the while, other ideas and plots were handled very well. So its not like I was disappointed in all of it, I just wish that it could have been more. Based on that, I don’t know how I feel about this show going into the final episode. There is a lot of problems to solve here and I hope Black Lotus can pull it off.