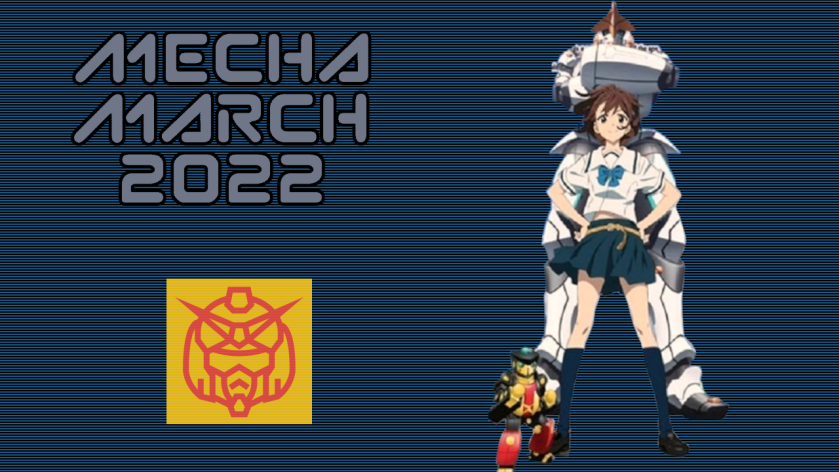 Having been wanting to watch this series for a while, I felt like it was finally time to check this one out. Especially since I at least wanted one “modern” mecha show for this Mecha March considering that the focus is more on retro shows. I never felt like I have had a good connection with semicolon shows either. Steins;Gate, despite people I know calling it a masterpiece, never found a love for itt. So, let’s discuss my second semicolon show, Robotics;Notes in which you have seen me discuss my third one. All of which follows the Mechanical Anime Review ways of never following orders because linear orders of operations are dumb. Anyway, Robotics;Notes.

Set in the far future of 2019 or ten years after Steins;Gate, the world is in trouble once again due to some conspiracies. Also, there is the love of giant robots guiding people forward through video games and just building them. The two childhood friends Akiho Senomiya and Kaito Yashio work together to push the story of this anime world. From Akiho’s love of the super robot show Gunvarel and trying to keep proving to her sister how good she is, she keeps the robot club open to work on larger and larger projects. Or the project. Kaito is a lazy one, but he is there to support her throughout her journey even if he is only seen playing the robot fighting game Kill Ballad.

The first arc of this story is where I had the most fun because it was very Gundam Build Fighters in scope? It was a small model robot tournament to keep the Robotics Club alive. Either win the tournament or the club dies. It also set all the characters into place for the rest of it. Akiho worked on the small robot there and Kaito was given the controls which were similar to Kill Ballad. They met the younger martial artists who eventually joined named Junna, there is a mysterious benefactor who helped the two configure the robots, and then the mysterious Subaru who refused to join the club but showed up in his super robot outfit during the tournament. It’s a lot of fun and I wish it could be longer, but then I have another show for this.

After the formations of the Robotics club with its new characters, the show kind of breaks up in multiple directions. Especially when Frau: the hacker, Gunvarel lover, all around lewd otaku, and shut in joins. For instance, there is a focus on Aki leading her team to building the Gun Build-1 project. Mainly to keep to the idea of what her sister could never do. So there is some time spent building it and eventually seeing it work. A whole big deal is seeing it slowly form and then the vast reality of robotics Akiho and the others. Will the reality of robotics weigh her down or will she return with a better idea? What about the sister that hates her wishes?

While that is in contention, there is the side mission of Kaito that he never shares with anyone about the Kijima Reports. Something he discovers when uncovering the cute A.I. girl Airi. Something that feels like a mini game until it turns into something more. The massive undercurrent of the entire show behind the conspiracy. Especially since it feels like every small thing that feels meaningless at first until the major conspiracy reveals later on. Especially when two plots merge together in the end. The show does feel very busy with so many details, but I feel like the end really does justify the means of the entire story. Even if some character stories in the series are a little overly dramatic.

To me, what makes Robotics;Notes great is the solid character journey each of the characters go through. For instance, Akiho breaks out of her sister’s shadow and takes the Robotics Club in a different direction and eventually surpasses her sister’s previous goals. I also like Kaito actually taking some responsibility for his laziness and taking on the challenge he caused. I love that Junna eventually discovers that she can love robots and Subaru getting his father’s respect after being pushed out of the robot club. Over all the plot itself is Frau’s entire plot for her mother’s pride of Gunvarel after her mother went missing.

With Robotics;Notes’ journey, I never feel like it feels connected in a world that it never could explore. The show is only 22 episodes in length and I wish I could have spent more time in this world then with the conspiracy sometimes. I mean, imagine if this was just a club piece of these characters just building giant robots. Considering that there are conventions based on giant robots and people love them, that would be a blast to just focus on. As a whole, there are no other anime focused on clubs which build giant robots for competitions. I know that is a “coulda, woulda, shoulda” thing, but the conspiracy covering everything up really is deadening in some respects. It feels like some potential the series could have had was shoved a little bit to the side.

Which brings up the visual aspects of Robotics;Notes. Produced during what feels like Production I.G. ‘s golden period of the early 2010’s when they produced a lot of interesting series with a very high level of production values. This show had some great character animation and tons of great mechanical animation as well. I mean, the characters in this story feel so alive. Same with the tons of settings and interesting side characters presented throughout the show which make it feel so full. All the mechanical animation in the end from the bad mecha to the new and improved Gun-Build 1 are pretty cool as already mentioned. The show really does capture the reality of robots in some cool ways.

I also love the attempts of realism in the robot realm despite the passion of its creatures. Real otaku work hard to make their dreams come true like animators. Passion versus reality is a good theme. The first Gun-Build project moved as slow as dirt from the lack of general engineering practices of highschoolers. Though, it is impressive for high schoolers to even make a moving giant robot in the first place. Having Jaxa involved with that robot club’s construction with some cool bits of laser technology and even the magnet monopols that even landed on the ground that were used to move a robot still had tons of gravity weighed behind them. A pretty cool final battle even if it’s two robots on the ground just punching each or the use of weapons. Infact, the impracticality of it all shows its face because it could have been two tanks.

I don’t think that it’s fair to really argue against what Robotics;Notes could have been in my mind compared to what it actually is. I mean, this is a semicolon show and from what I’ve seen, those series are centered on conspiracy. Maybe it just shows that these shows are clearly doing something that I don’t enjoy at much for my own tastes? I do like the characters and ideas behind this one but I feel like having all the ideas wrapped into what concept for all the characters pushes it into some dead air for me. It takes away the world of the show by having it all focused on one thing even if I enjoyed so many of the concepts in Robotics;Notes. That being said, this is a good experience overall, but far from perfect. Still, my favorite one of these shows is Occult;Nine, but Robotics;Notes isn’t a slouch either.