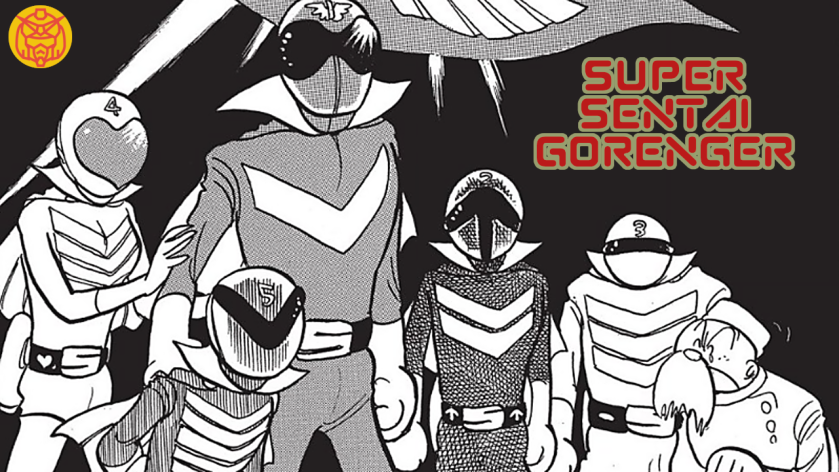 I’m pretty happy about how much older manga is slowly making it to more audiences. It started with series like Queen Emeraldas and other Leiji Matsumoto works, but it’s slowly becoming a trend for more to come out. I’m still amazed that the Rose of Versielle of all things has appeared in its totality recently and that’s amazing. Same with a lot of other retro manga. All of which comes with Seven Seas releasing this version of Shotaro Ishinomori’s Super Sentai Gorenger manga before the larger tome of Kamen Rider came out. It must have been a success for Kamen Rider to come out. I wonder what other Tokusatsu manga can come out soon too.

But yes, Super Sentai Gorenger feels like a very different and somewhat simplified version of how five colorized super suited people join together to fight evil. An evil organization called Black Cross Army threatens world peace. You know, as all evil organizations do. So who is better to defend the Earth other than the Earth Grand League or Eagle for short. This series happens after the Black Cross Army destroys Eagle headquarters all across Japan and only five people (and the people supporting them) in their cool suits. It’s some fun stuff.

The team is formed by the red or Akarenger Tsuyoshi Kaijo who is supposedly the leader in the experimental suit. The next ones are the Blue or Aorenger Akira Shinmei, Yellow or Kirenger by the name of Daita Oiwa, Pink or Momorenger Peggy Matsuyama, and then Green or Midorenger Kenji Asuka. A decent sized cast to be handled in a shorter amount of time as they fight against evil. There was a lot of fun teamwork when they had it. No giant combining robots or zords, but they have a flying jet with flames on it.

Compared to Kamen Rider, Gorenger is a lot shorter which leaves a lot less time to characterize its cast. (Also kinder and more kid friendly too.) I mean, the main focus is on our red or Akarenger by the name of Tsuyoshi Kaijo and his personal story. It opens with him training in martial arts under his father before he is tricked into putting on the Akarenger suit before equal shows up and killing his family so he has no choice but to join the other four members who are quickly introduced as just other cast members who are eventually characterized in some very easy but simple characterization.

That mainly comes from the cast playing the riddle game. Akarenger himself is never involved with that as he goes on his own for his missions most of the time and eventually so does Akira because of one of his contacts with his friends. Asuka Kenji would tell the dumber Oiwa a ridder he wouldn’t get while he is eating, but the smarter and much more clever Peggy would know it. Or Asuka and Oiwa constantly have their own sorts of fights. This is all the characterization we get for the most part and it at least allows us all to know how they think and go about their business.

There are a lot of episodic or chapteric(?) adventures in each case that are really cool. Very simple, but just a lot of fun to see how our Eagle units will get out of it somehow. Some are the obvious sort of mysteries of where Black Cross Army is going to steal something while others are strategic fights where they would have to work together or be destroyed really easily. There was also a giant dinosaur robot that went after some generators and that was just really cool. There is a lot of coolness in this manga even if the storyline, with how it’s organized, is all over the place.

The manga itself is great. It isn’t as visceral or full of great panel spreads as Kamen Rider, but the tone is also different too and just more fun. A lot of the same techniques are well placed into it though. There is a lot of great sense of movement and large panels, not page spreads, that show how close a dinosaur robot is next to its target and make it feel huge. Or the lots of cool mechanical designs and some cool action sequences that feel real dire. Shotaro Ishinomori is a very good mangaka that knows how to get his characters and other things to feel like movement and other things in there as well. I like it a lot. This was a fun manga to read .