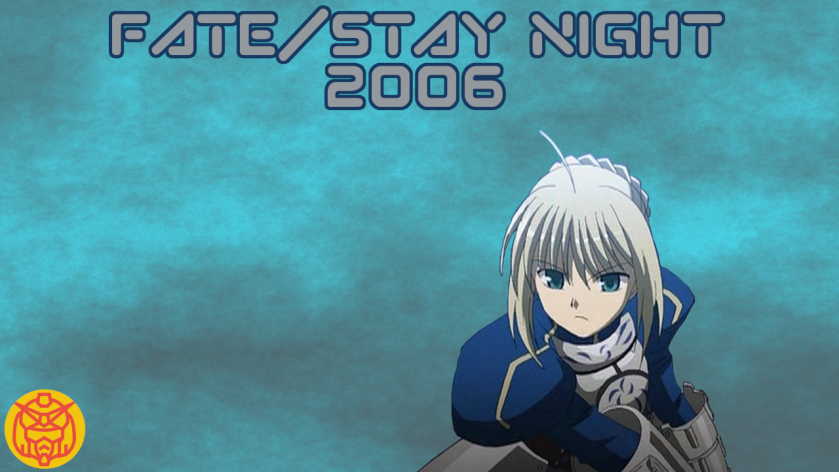 I feel like this post has been waiting for a long time for me to get to. I mean, this is a series that I rewatched after I am not sure how many years with our #AniTwitWatches group watches through on twitter. Man, it felt nostalgic just getting into it. I have mentioned before on my Fate/Zero post with the fact that it was the series that started me going onto this fate train. The thing is, I did watch F/SN 2006 before it. The difference is that this was like watching the OG Star Wars to me while F/Z is the Empire Strikes Back. Zero is so much better and well executed on a lot of levels that it made me want to know more about the fate universe while 2006 was almost one and done.

Which is interesting considering that watching Fate/Stay Night 2006 is like returning home after who knows how long. I’ve gone to so many places in my fate journey after Zero from the standard shows and movies in UBW and Heaven’s Feel to the larger expanded universe from Fate/Apocrypha and eventually the adaptations for Fate/Grand Order that have appeared. It really has become an obsession that I have continued with to this day. I’m still waiting for those Camelot films to completely come out so I can watch them one after another. So what I am saying is that I can’t write this post as unbiased as I usually try to be because it’s literally impossible to do so. Well, much more impossible than usual because no one is unbiased.

As many people know, Fate/Stay Night is a series that takes place in a small city in Japan called Fuyuki in the year 2004. A time where 10 years ago, a large fire for some reason (we know the reason) destroyed it and yet, here it is again. Our boy Shiro was a survivor of that with those scars still in his mind from that incident and what his dead adopted dad tried to tell him before he died. Well, the chaos of that event from years ago returns as one expect and its death game between mages known as masters with their summons of servants from all sorts of places in history. It’s incredible. The Holy Grail War is back and it’s time to do some work.

So of course, the tale is the tale of Shirou facing that trauma head on instead of running away. Untrained as he may be, Shirou summoned Saber (otherwise known as K@@$ A@$%%!@) and he joins the fight. I mean, the show deliberately placed him on the bottom level compared to everyone else to have the world and its fighting more explained to him as he moves onward. Not to mention how the world suddenly feels more threatening than it used to be as he faces people at his school that have servants, that rich loli with the largest servant possible, to some mysterious ones that no one knows where they came from.

I find the relationship between Saber and Shirou very interesting. There is a romantic interest there and the grail did place two similar sorts of people together (even if Saber is kind of a hand me down in some ways). While that sexual tension is there, Saber and Shirou are similar people with similar traumas and their butting of heads when trying to get a resolution over it. Saber and her never giving up attitude is the same as Shirou’s even though Saber’s is much stronger. Eventually, even if the two never accept each other romantically despite that tension, there is a sense of some kind of resolution in the series.

That leads to some very interesting encounters and relationships with a cast of characters that are very interesting to see take form. That one hostile relationship Shirou had with best girl Rin from a mage family quickly becomes a team. Rin, having grown up in that mage family, knows a lot more and while she starts out as the explainer sort of person first, she eventually becomes the best sort of wingmen as Shirou and Saber get closer together. Then there is that entire Archer (Rin’s servant) and Shirou have a complex relationship there too. Rin and others playing into them are great there as well.

That being said though, the series is really inconsistent with how it focuses its drama on other servants. For all those good things I mentioned, Fate/Stay Night 2006 has a lot of odd things in it by attempting to make it much more of a death game. So one plot element from earlier might be waiting there in the background or on pause while another servant fight happens leading to getting the other one later on. Really annoying when the first threat is larger in the way that it affects multiple people at a singular location instead of just Shirou and Saber.

The show itself also tried to do the slow injection of Shirou joining the Holy Grail War into his normal life. Especially Shirou’s life with Sakura who cooks for him earlier in the morning and Fuji-nee is just there. It doesn’t help that Fuji-nee is kind of annoying so as more of these strong girls show up as more to just stay at Shirou’s house that there needs to be a found acceptance there when it’s Shirou’s house and his way of life. I mean, those scenes do offer a relaxation from the drama and tension of the holy grail war, but they feel a bit too much at times.

I feel like all of those problems come into a larger focus when it comes to the system of magic that is at play. It would be very easy to call Fate/Stay Night 2006 as a shonen battle series. Then when I say that there is a set of rules in place in how the war is supposed to work and then the mechanics either come in at a convenient time OR just plain just doing what it wanted then. That could be an adaptation problem with the visual novel itself keeping those rules more in check or it could be a fault of the entire thing where a minimum amount of rules make it play out better. This isn’t Hunter x Hunter writing, it’s a lot looser than that.

Then comes that sort of mixed nature of the visuals itself. For 2006, I think that this is the best that Studio Deen could have made this show. It was also at that era where the visual language from the older style to the new digital colors was still playing out. There are a lot of older style shots with full color atmosphere takeovers. Then there is the show itself that doesn’t have its own sort of consistent visual language from the awful fighting scenes to some that look good or the many cuts and strange languages there. It’s a very hodged podged production with a lot of issues in there too.

With all of those things said, I still really like this sort of series here. Fate/Stay NIght has a lot more things in it that I can’t really talk about in a way that would be spoilerly. That fact that protons of other routes made it into this series makes sense given that this was the adaptation back then before Ufotable did everything into it too. Those facts made it so much more interesting to me though. That makes this portion, to me, the place to start Fate because of the visual things and the fact that the writers of zero paid attention to what is in this series and made sure a lot more of those things had weight in them too.  So yeah, a good experience for me overall in an experience that I like and love in there too.