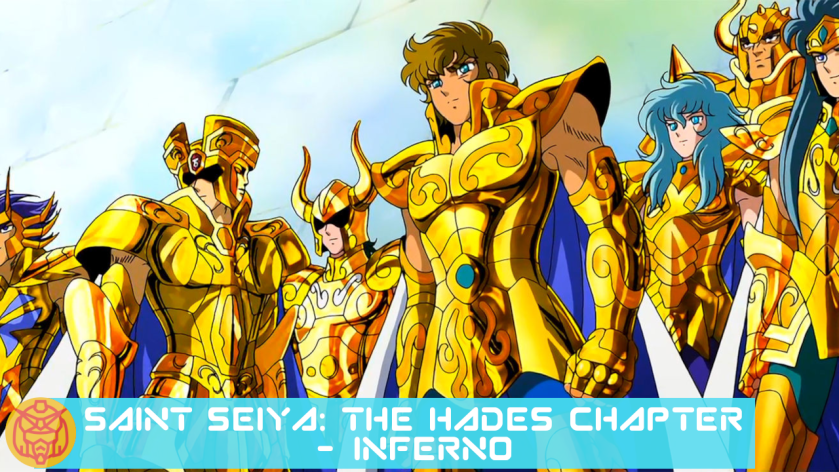 I am starting this post wondering how often you see the gods of the underworld in an anime series. I’m not just talking about shonen battle series, but every genre imaginable. Dragon Ball, right? I mean, there are so many gods now that you can sell them for cheap. Then there is Yu Yu Hakusho, Noragami, and I am sure there are others. Then there is Death Parade and Death Note and so many other things. In manga form, I’m pretty sure Saint Seiya did it before Dragon Ball. I mean, this is a series that talks about Greek gods and has so much Greek lineage in it that it’s insane because that is the concept of the show. Sanctuary in Greece, the parthenon and so many other things. Still, the underworld hasn’t been important until now.

Like Dante’s Inferno, Seiya and his friends (Hyoga, Shun, Shiryu, and Ikki) are separated into groups and must walk through Hades’s many parts to defeat Hades himself in order to save the world from becoming the literal land of the dead from the Greatest Eclipse. For a while, the story focuses on Shun and Seiya who are separated from the rest of the group. But let it be known that Ikki is doing his own thing like usual while Hyoga and Shiryu are walking with a god saint, Canon, as they travel a different path. I like this part of the story. It’s like watching a classic Greek myth in motion, except it’s a bunch of shonen characters ready to kill and defeat everything in their way. If only their opponents weren’t stronger then anything they faced before.

Seiya and Shun’s journey is just so much fun and full of all sorts of classic Greek myth easter eggs. There is the ferry man, the god who checks in people that recently died, the greek frozen death area that I forgot its name, a three headed dog Cerberus, a stand in for Orpheus named Orphee and so many other references along the way. It’s so much fun just watching this happen and eventually have Seiya and Shun fight some powerful enemies or just get away from them if they can’t. Eventually, what people think of Hades comes out and that was a fun scene. Really set a lot of cool things in motion. The other character’s journey aren’t as interesting

A prevailing plot line through this part is Shun being a reincarnation of Hades himself. Now, we have had many reincarnations of gods in this series. From Saori being Athena and Julian Solo being the reincarnation of Poseidon. So there is a plausibility of it all happening. It does feel cheap in a lot of ways after all of these episodes, but it does create some real drama. Not just with Shun and the other saints, but there is a fantastic story line between Ikki and Shun for their brotherly bonds being tested by what happened to them since they were born. It investigates every part of their connection and it’s really good stuff. The first half is fantastic because of the adventuring through Greek myth and then all of this here too.

Then the second half is where Inferno hits a large wall. I don’t just mean mentally or just story wise. There is a literal wall that our saints have to go through in order to continue chasing Athena and Hades. It is a wall that only gods can go through and somehow, our saints have to get through it to the land of the gods, Elysium. So it is all the last remaining gold saints trying to create sunlight powerful enough for the bronze saints who just wait for it to happen. I feel like this is literally one of the few times where the story I’ve ever seen has been stopped by a literal wall before. The world is going to end because of Hades’s Greatest Eclipse where the world will become the land of the dead because no more sunlight will hit Earth ever again.

So this is the last stage of the final trade off from generations of the older saints to our bronze saints there too. Not just the last five remaining saints, but all of them. It has been seen for a while that every gold saint’s armor is alive in some way, so all 12 of them joined together to create the sunlight that allows our bronze saints to go through it all. I’m still amazed by every bit of tension that was created by a literal plot wall. Saint Seiya can get emotion from literally everything in it too. That is the power of this franchise. Not just great strength of emotions, but some really good action scenes there too in amazing ways for it too.

Inferno has some fantastic fight scenes and it’s so colorful. It really is like the 1980’s shonen series upgraded, with digital animation, to the mid to late 2000’s style of animation. It looks really good and a lot of the character designs, which are still classic 80’s, pop out even more than they did before. Also, the environments of Hades, from the frozen Icrys to who knows where, are well drawn. I skipped out on so many villainous characters, but in the end they didn’t matter even if they were an initial threat throughout the show. Hades is the only one that matters in the end and his character design is amazing if he is Shun or if he isn’t.

So this Inferno chapter is really good. Not a solid experience due to some of the pacing things or some of the villains that were important at first and then were left behind there too. But the experience our saints went through was huge. From Shun’s personal stories as he was taken over by Hades and other things, our Saints are just exploring hell itself, or just the transferring of generations so our saints can save the world because it’s not possible for the gold saints to do it ever either too. It does feel like all of Saint Seiya has built up to all of these moments, so it’s great seeing all of that pay off after over a hundred or so episodes.