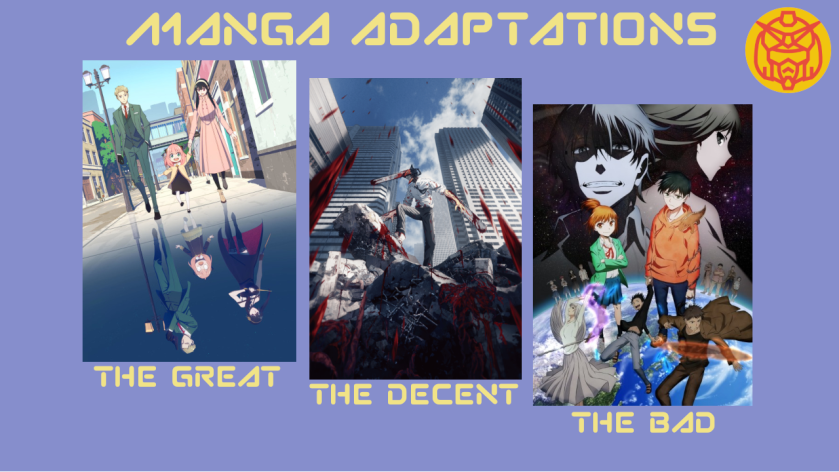 Fall 2022 was an interesting season of anime. Mainly because there was a lot of good and interesting bits of anime to watch. A wide variety of material with some of them hyped as you would have expected them. At the same time, there were some unexpected hits that showed up. So in that way, it was a feast for a lot of people to just sit back and enjoy watching some anime. I was one of them and I still have some shows to go back and check out now that I am out of it. Would be quite a bit of fun then.

What this show also did was provide some interesting looks in adapting manga. A very interesting sort of great, decent, and mediocre. Those shows being in order: Spy X Family, Chainsaw Man, and Lucifer and the Biscuit Hammer. So that is one of those situations where it would be just a great thing to see what I consider an interesting way interpret what I think would be a good way to present manga on screen. There was a Gigguk about this video recently and that is kind of where my idea came from. This will be something different from that.

I’m going to start with the worst one first just so I could end this on a high note.

Lucifer and the Biscuit Hammer (The Bad)

Yeah, this adaptation has such mediocre visuals. It enhances almost none of its characters powers and abilities in any sort of way. It’s a lot of lame panels from the manga that are colored and just put into 16:9 framing. The “animation” were just character cut outs flying around the screen. Or there was mediocre CG for the golems was pretty bad and that was when they didn’t move as much either. All of these climatic moments of characters fighting for their lives and you just can’t get into it on an animation front at all.

It was lucky for me that Lucifer and the Biscuit Hammer had some excellent writing to it. Something which actually was translated over from the manga itself. The character writing is excellent and very natural and no sort of bad animation is going to take that away from Lucifer and the Biscuit Hammer. It is a very good play on what is the usual sort of shonen battle story by grounding it in that sort of way. Plus, no one on Earth can make Samidare bad at all. She’s excellent and powerful. The best heroine for this sort of journey.

This one is such an interesting case of how it felt wrong originally. The Fujimoto made his Chainsaw Man from a much more edgy and juvenile direction. That was the point of that manga because Denji is a juvenile young teenager who has no sort of personality besides wanting to have some basic needs. The world feels so dirty and it works because the entire universe is on the brink of destruction at any moment and Denji is the only person that you ca. You don’t exactly get that sense of feeling from the visuals of the anime at all. It’s way too clean and too polished for that sort of experience. Yeah, that was the first reaction I had.

As the anime went on and established its more cinematic style, I kind of dug it more. This was such an interesting way to see a different artistic vision of the same sort of material? How is Mappa interpreting the material that Fujimoto presented to the world. The more things moved onward, the more things worked for this adaptation even if the style is off at first. The whole show makes a claim for why the show in this style should exist in the first place and why it works. The characters, art, animation, and music worked for this sort of approach and I’m glad that, while the show didn’t hit for some people, it did for me as a person who is up to date with the manga.

From an adaptation stand point, I honestly have no notes on how Spy X Family are doing what they are doing. Perhaps some chapters are not as interesting as others, but you can tell there is so much passion and energy put into the production of this anime because the creators love the source material. I think adding in 1950’s and/or 1960’s spy music as a Leitmotif is so good. Same with taking moments from the manga and expanding them in a way that is in spirit of the manga itself? No notes at all, it’s the way that one would expect this pseudo crime thriller with slice of life cute and good moments should be adapted even if its pretty obvious. When you do a good job with the obvious, it doesn’t matter if its cliche or not.

This is a once in a life time kind of post, unless it happens again. A season where I watched all of the material these shows were adapting before hand. I have read the manga or Lucifer and the Biscuit Hammer this year. That is some peak content. I also read whatever new chapter of Spy X Family and Chainsaw Man come out because I really like both of them. In this rare in case and I feel like I had to do something with that even if it turns out to be this short post.